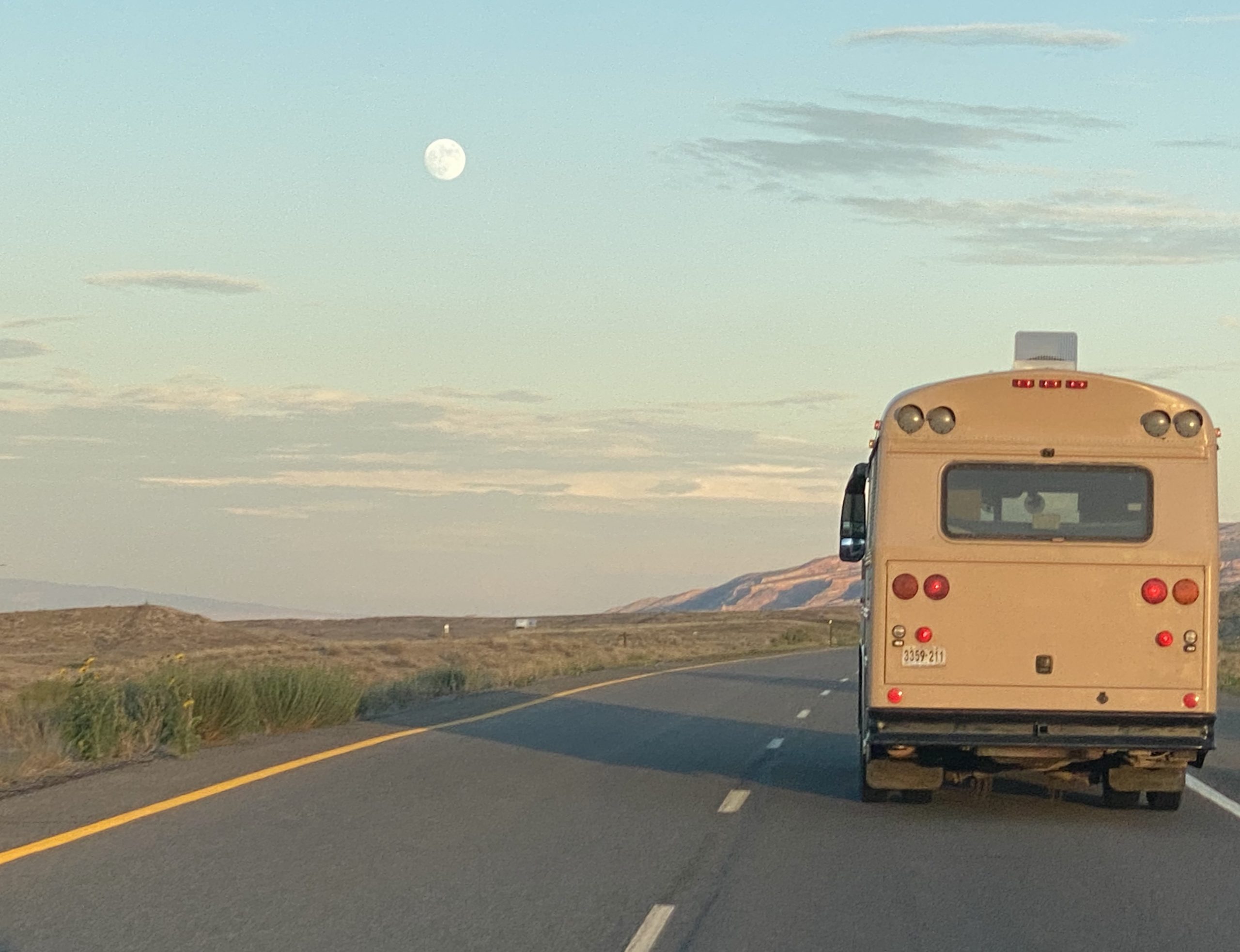 Buying the Bus and What Came After…

Buying a bus felt a lot like hunting down a New York City apartment. We (Ryan mostly) spent every spare moment scanning postings, making calls and sending emails. We needed a bus that was completely built out, because we lacked the time and experience to start from scratch. We joined groups on Facebook: Skoolie Planet, Skoolie-Nation, Skoolies for Sale, Skoolie/Schoolies/School Bus Conversions For Sale USA, Skoolie Community USA, RV-Skoolie-MotorHome BUY/Sell/Trade, Skoolie Lovers and Skoolie Converters Untamed. (All of these are excellent resources, built of a helpful and enthusiastic community of skoolie lovers. If you are interested in owning a bus, join these.) We sent countless unreturned emails, ran into scams, drove for hours not 100% sure of whether the seller would be there to meet us, and toured buses that weren’t at all as advertised.

When we finally found our bus, we were driving back from Las Vegas, where we had toured a bus that looked great online, but upon closer inspection, was built like a stage prop. Like many things in Vegas, a beautiful facade but shit underneath. Ryan stumbled upon a post for a 2003 Thomas Built with a CAT 3126 motor and a MD3060 Allison transmission in the comments of another post where someone was looking for an unconverted bus to buy. There were a few pictures and very little info, but we were able to hunt down the posting from the previous seller that showed more.

When we reached out to the current seller, she was guarded and reluctant to give us information. (Many sellers get jaded from the battery of emails and questions, not serious buyers and looky-loos). We assured her of our sincere interest and told her we would be driving through Utah on our way back to Colorado, sent her pictures of ourselves (in hopes to convey we weren’t ax murderers) and offered to prove our ability to purchase by showing her a screen-shot of our bank balance. She finally agreed to meet us and show us the bus.

When we turned off the highway in Utah toward the town she had mentioned at some point in our correspondence, we hadn’t heard back about whether she could meet us that day or exact coordinates of where we would meet. We figured the worst that could happen was we took a drive through Utah and went home. We had been winding through country roads for an hour before she wrote back. We were instructed to meet her in the parking lot of a fire station about hour away.

When we pulled into the lot, she wasn’t there. In fact, no one was. We hadn’t seen another car in 20 minutes. We reached out to her again to let her know we had arrived and waited. Another 20 minutes went by before a mid-size SUV pulled in and a masked woman with two small children in the backseat greeted us and told us to follow her to where the bus was parked. She turned up a dirt road that twisted into BLM land and eventually pulled into a clearing where we saw the bus, in all its tan glory.

The bus looked huge, even against the landscape of trees and mountains. It was 32 feet of solid metal and windows, with a huge side hatch and a flat front Though the bus didn’t have the engine Ryan was hoping for, we were assured that it could handle cross-country travel as it was driven to Utah from Pennsylvania with no incident just three months prior. Since purchasing it, the seller had mostly used it as a glorified tent. She hadn’t tested the water system, water heater, solar system or cooked anything in the kitchen. She knew the furnace, some of the electric and wood burning stove worked and that it ran. Everything we knew about bus mechanics, Ryan had learned over the last few months from forums and blog postings, and it wasn’t much. We slept in the bus that night to feel it out. By morning, based solely on the romance of watching the sunrise through the back window, I was convinced we should buy it.

We started by calling around for insurance. We read that this is commonly difficult because many companies want nothing to do with converted school buses. Thankfully, the bus was already titled as an RV. When we called our local State Farm agent, they were super helpful. We couldn’t believe it when they told us our policy for a year would only cost $450 for full coverage with collision. We paid over the phone and we were emailed our insurance cards. A strong start, I thought.

Paying the seller was far more difficult. The closest bank was over an hour away and she wanted a cashier’s check and wanted to see the funds available in her account before signing over the title. Understandable, for sure, but it was Thursday, the 2nd of July and banks were closing early and would be closed the 3rd due to the holiday falling on a Saturday. We took the three hour round trip to our bank, got the check and barely made it to her bank before they closed. She was uncomfortable when she was told she wouldn’t be able to verify the funds until the following Tuesday or Wednesday, but, agreed to let us leave with the bus when we were able to show her the money had been released from our account. Everything felt very tense.

The Pennsylvania tags on the bus were expired and we still needed to transfer the title. Due to COVID related restrictions, we needed an appointment to get into the DMV. We called an explained our situation to the registrar who kindly granted us an audience the same day. We drove another 45 minutes to that office. The registrar informed us that the title could be signed over with a signature on the back and issued us 72 hour tags to get us home.

After all this running around, we still hadn’t had the chance to test drive the bus. It was dusk when the seller finally got behind the wheel and showed us how to fire it up. We strapped in her two kiddos, Ryan took the jump-seat next to the driver’s seat and I sat on the floor, bracing the stove from jiggling free of it’s cubby as we bumped down the dirt road. Ryan and the seller switched spots just before we got to the paved main road. He crept along at 15 miles per hour to get his bearings and then turned onto the main road. There was about a mile between the dirt road we came out on and the one we would turn into to return to camp. The bus seemed to run well. It was quieter than I expected as we accelerated to 30 miles per hour. Ryan slowed the bus, flipped on the left blinker and as he began his turn, there was a loud thud. The bus lurched sending a few loose items to the floor. I thought he had run over a big rock, but in-between profanities, I heard him say, “They hit us!”

I got up off the floor and looking out the window, saw a half-ton pick-up truck, pulling a trailer, crumpled against the driver side of the bus. We pulled off the main road to assess the damage. Everyone was okay, but the truck was totaled. We called our insurance and the police. It took hours to resolve. Ryan was a mess of nerves and kept muttering, “We never should have done this.” In the process of reporting the accident, we learned that the turn signal wasn’t working. We didn’t know whether or not the impact had caused the fuse to blow, but we were worried about driving back to Colorado without them.

We slept in the bus again that night. Well, I slept. Ryan was up researching turn-signal fuses, watching videos of RV verses bus wrecks and mulling over who was at fault. In the morning, he looked worse than he did the night before. All I could do was assure him that this was all happening for a reason. I joked about it being the ultimate test drive, “At least now we know just how safe it is in an accident!” We just wished we were home (me with the bus and him without). Now, all that was left to do was sign over the title and fix the turn signals.

We met the seller in the parking lot of an auto parts store where we tried (unsuccessfully) to find the fuse that would fix the turn signals before our long journey home. The seller signed the back of the title, transferring ownership to us, filled out a bill of sale, and we were on our way.

Ryan drove the bus and I followed behind in the car. He communicated with me by walkie-talkie before each turn so that I could use my signals to alert other drivers. The bus seemed sluggish, but did okay on the country roads. It wasn’t until we reached the highway that we really noticed the power issues. The bus was driving dangerously slow with a top speed of 45 miles per hour. It took over 8 hours to drive what would have been less than 4 in our car. We wanted to keep the engine from over-heating, so we regularly pulled off to let it idle. With the acceptation of a truck kicking a rock against our windshield, which left a quarter sized chip, the drive was uneventful. When we finally pulled into our neighborhood and parked our bus on the street beside our house (thank goodness we didn’t have an HOA), we were stressed and exhausted.

The next day we were tasked with finding a mechanic to look at the lights and engine, a windshield chip repair person and a body shop to fix the dent from the accident. We also needed to get the bus registered with Colorado plates so that we were free to legally drive it to all of those places. When we went to the DMV, we were informed that we had a “skipped title.” What that meant was, while Utah accepts multiple signatures on the back to transfer ownership, Colorado didn’t. We would need the seller to go back to the Utah registrar and have the title reprinted in her name, then sign it over to us so we could do the same in Colorado. We were given 30 day temporary tags and sent on our way.

When we called the seller, she was kind enough to agree to help and made an appointment at her DMV for later that week, which gave us time to mail the title back to her. When she went in, the registrar suggested she transfer the title directly into our name instead. They faxed us the form, the seller paid roughly $5 and promised us a revised title by mail within 30 days.

Ryan had to return to work, so we decided to wait on the mechanic and body shop. In the meantime, I planned to redecorate the interior of the bus and move into it as I moved us out of our house. 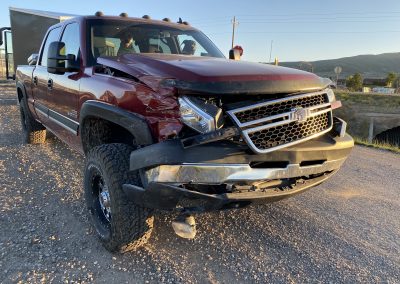 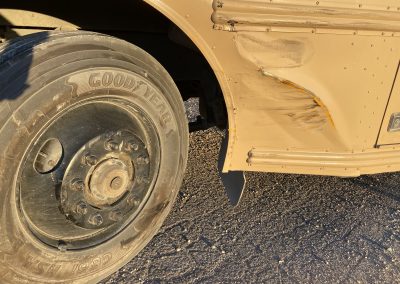 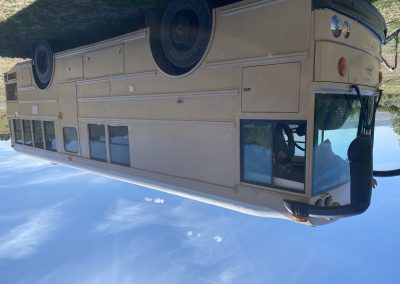 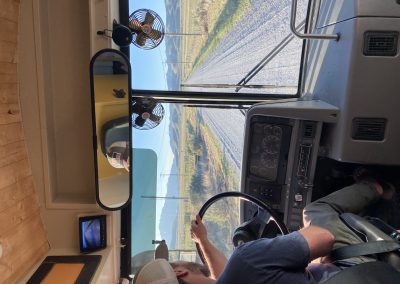 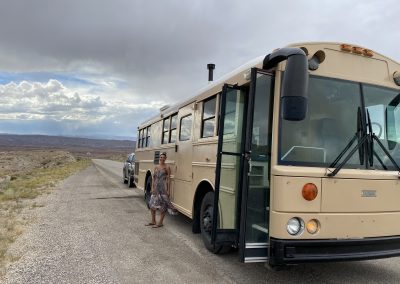 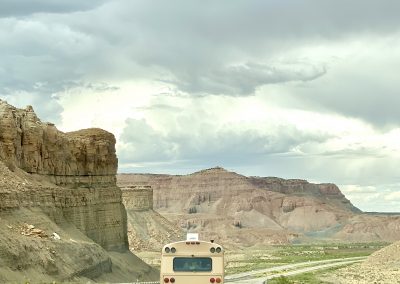